skip to main | skip to sidebar

The social life changes every day. For that, the brand has to evolve to stay on the market. That is what happened for Michelin.

Michelin is a french brand which produces pneumatics for cars. It’s very famous in the car’s world. That’s why its logo is known worldwide : Bibendum 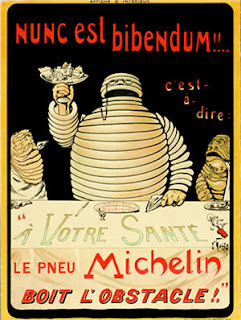 It was a very big character. His body was made on tires and his glass was full with broken glass and nails. We can see the other guests that "deflate" and the home slogan "Michelin, the tire which drinks barriers”.
The game is simple : To show a charismatic people who crush its competitors because he’s very big.
Bibendum is a colossus with high body mass consisting entirely of tires and numerous fine except that his hands are still bare. His face is expressionless. Despite the costumes and situations in which he was portrayed these characteristics provide a guide to the many representations of Bibendum. Whatever the designer, a unit is dominant in the drawing. The trait will not evolve much beyond the individual style of each artist. Over time, he will still become more and more human. Around 1910, he faces with a new mouth with lips and he show a big smile. Furthermore, the character changes : Bibendum, who was a colossus, became a nice guy who distributes no longer the blows but advices. 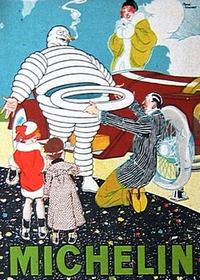 In the 20’s, the brand evolved. Tires became larger to better absorb shocks and increase the handling. With products’ evolution, Bibendum had to evolve too. He lost its small rings in favor of larger and fewer folds. He was younger, joyful ! In 1926, the Bibendum became more institutional and uniform. He respects graphic’s codes and reinforces its popular recognition.

Between 1940 and 1980, Bibendum lost the center stage and it was relayed to a second role. It was in the mid 80’s and with the new poster campaign that Bibendum came back in Michelin’s advertising. In most cases the Michelin Man only appeared on the logo of the brand with two lights in the drawing periods :
1. First period : Bibendum had his hand raised always associated with a tire between 1950 and 1960. 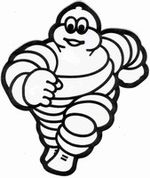 In 1998, Bibendum was 100 years-old. For that and to follow the social’s problems, Michelin transformed a new time the Bibendum. This year, appeared the problem of obesity. Michelin imagined that Bibendum had to be thinner.
Bibendum became more slender and clearly lost round in favor of a sporty style that rejuvenated the character. Since the end of the 90’s, with the help of new technologies, the transformations were faster. They didn’t use the pencil anymore and replaced it by the computer. 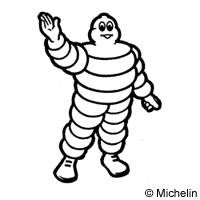 From 2005, it gradually used digital modeling to create the 3D character that we know today and which is presented in most advertisements. 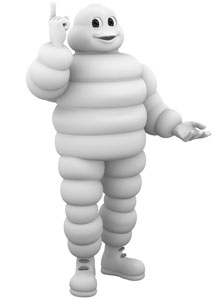